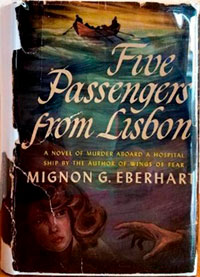 «NIGHT…
FOG…
AND MURDER!!
It had begun as a voyage to freedom, a dream come true.
But now every passenger on the ship was stalked by deadly fear, every shadow had become infused with dread.
One man had died, a knife buried deep in his back. Another had met an even more gruesome end. That was bad, but what was worse – the murderer was readying to strike again…» Five passengers and three crewmen survive a sinking Portugese cargo ship via a lifeboat, but when they’re picked up by a U.S. hospital ship, the Portugese mate is found murdered. Against a backdrop of Portugal being a haven for espionage with undertones of Nazi and Resistance alliances, Eberhart spins a claustrophobic web.